The environmental energy contained in motion, kinetic pressure, light and temperature difference is converted into energy to power energy efficient radio communications. But generating energy is not enough; it has to be exploited, and this is where electronic components come into play.

Energy Harvesting: how does it work? What new technologies are in the running? How will this simplify our daily lives, particularly in terms of the smart home? Read on for further details and an overview of the latest technical innovations in this field.

EnOcean is a leader in this market and offers packaged solutions with generator + electronic part + radio module. This is one of the solutions adopted by our subsidiary NodOn for products such as the Soft Remote. The system is mechanical – the press of a button triggers the movement of a part within an electrical coil. The induction within the coil generates an electrical voltage which is transformed into a current. The energy from simply pressing a button is small but enough to activate roller shutters, a garage door, or to switch a lamp on or off. Find this technology in our range of EnOcean products: Soft Remote, card reader, remote control, etc.

In the field of mechanical actuators, other examples include: 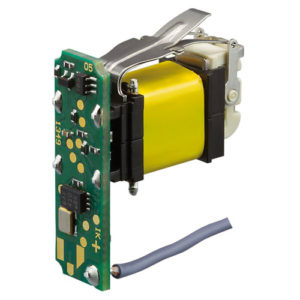 In the image (above, left) the coil (in yellow) and the mechanical actuator above (push button type) which move the white part to the right of the coil to generate current by induction. On the left is the RF circuit board that establishes radio communication with smart products such as lights, shutters, detectors, etc. 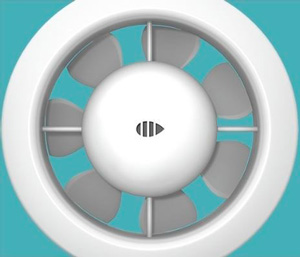 The movements of the propeller are converted into energy between 100 µW and 10 mW which can be directly used to power, for example, a sensor or a detector.

Everywhere there is light, even at low levels of 200 lux or less, tiny solar cells can harness this energy source for a wide range of battery-free sensors. These include temperature sensors, CO2 sensors, presence sensors, solar-powered window contacts and humidity sensors. But this requires an element to store the accumulated solar energy. At NodOn, we use this technology in our temperature and humidity sensors. 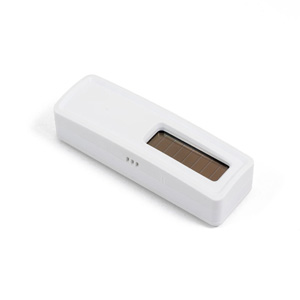 In the image above, the brown solar cell of the sensor captures energy. Placed in various strategic locations in a building, autonomous and connected to each other via the EnOcean protocol, they feedback to the home automation gateway on the different rooms being checked. An ideal solution for controlling the temperature of your living rooms, the humidity of your bathroom (and, as such, automatically activating the ventilator) and the hygrometry of your wine cellar!

The Peltier effect is a physical phenomenon considered to be a thermoelectric effect. It is manifested by a displacement of heat between two materials of different natures created by the presence of an electric current. This phenomenon is reversible, known as the Seebeck effect. In summary, if two materials are placed side by side at different temperatures, a voltage is created between the plates and generates current and thus energy. This technology is used in thermostatic radiators. 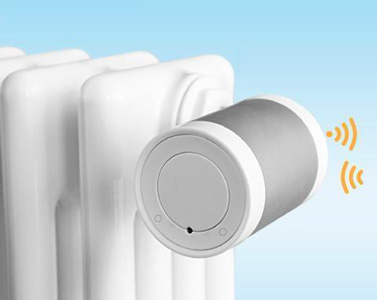 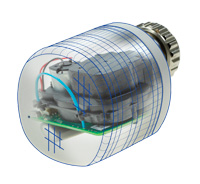 The Smart Valve from German manufacturer PMDM works without
battery or power connection. Its new electronic heating valve uses the thermal difference between the radiator and the room to extract electrical energy by means of a thermoelectric generator (TEG), and for the first time, makes it possible to build a mechanical system in which the energy consumption is lower than that of an electronic systems… according to the manufacturer 😉

Piezoelectricity is the property possessed by certain bodies to become electrically polarized under the action of mechanical stress and conversely to deform when an electric field is applied. This technology can be used as a generator or sensor. This technology is being developed by PI Ceramic which uses the direct piezoelectric effect by the mechanical deformation of a piezocrystal. 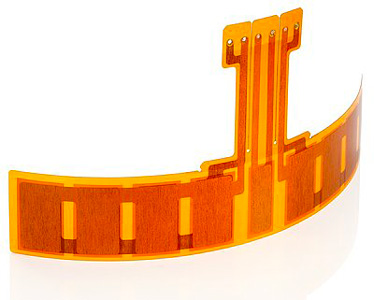 Wiliot, an Israeli start-up, is developing this technology. It is highly promising as it is based on harvesting energy from the electromagnetic waves that surround us, of which there are an increasing number! Wiliot has come up with a Bluetooth chip with an unlimited lifespan in the form of a small sticker. Thanks to its $30M funding round, the Israeli company is building a chip with processing power and sensors, at a cost that should be much lower. Its potential future targets include the iBeacon technology, used in supermarkets to track the position of your shopping carts in order to send you the right promo code at the right time.

The potential use of these new generation low-cost chips is particularly keenly awaited in all supply chains where item, pallet and package tracking is crucial. Which explains why Amazon invested heavily in the startup during the last funding round…

It is not enough to simply create energy; it still needs to be converted into usable energy. This is where electronic components come in. Today, specialized components are available to power circuits or batteries from sources that provide very small amounts of energy or with variable voltage/current.

For example, the SPV1040 and SPV1050 from ST, a generalist manufacturer, or from Linear Technologie which has a wide range of products to cover different energy sources at different power levels. The LTC3588-1 integrates a low-loss full-wave bridge rectifier with a high efficiency buck converter to form a complete Energy Harvesting solution optimized for energy sources such as piezoelectric, solar, or magnetic transducers. These revolutionary integrated draw only very small currents (in nano amps) but nonetheless provide high efficiency power conversion with minimal external components!

Modern components use a process that optimizes the transfer of the power delivered by the source (e.g. solar panel): maximum power point tracking (MPPT). The objective of the system is to extract maximum available power from a non-linear power source. This is the case of the BQ25504 ultra low-power boost converter with battery management for Energy Harvester applications.

Energy Harvesting solutions are numerous and sometimes complex to implement if you want to do everything yourself. At Altyor, we pay the utmost attention to choosing the components best suited to the product’s end use. The combination of Altyor’s know-how with EnOcean’s very low-power technology allows us to offer relevant packaged solutions for battery-free operation.

By observing the technologies and the numerous emerging protocols, NodOn has innovated on the market with its 2.4Ghz solution.

With this new 2.4GHz multi-protocol platform, NodOn contributes its experience in terms of specialism (roller shutter, heating, lighting, etc.) and the customer then chooses the radio protocol they wish to use from between Bluetooth Low Energy, Zigbee and Thread, as these three protocols run on the same hardware platform.

Wirepas: our partner in software development

Key accounts and product innovation:
the advantage of industrial agility

IoT: definition, figures and challenges
How to succeed in the mechanical design process of your smart devices?
Login to Altyor
Reset Password
Enter the username or e-mail you used in your profile. A password reset link will be sent to you by email.
Our website uses cookies, mainly from third party services. Set your privacy preferences and/or accept our use of cookies.
More options